Rapid economic growth and increased agricultural productivity over the past two decades have seen the number of undernourished people drop by almost half. Many developing countries that used to suffer from famine and hunger can now meet the nutritional needs of the most vulnerable. Central and East Asia, Latin America and the Caribbean have all made huge progress in eradicating extreme hunger.

Globally, more than 800 million people are still living on less than US$1.25 a day, many lacking access to adequate food, clean drinking water and sanitation. Rapid economic growth in countries like China and India has lifted millions out of poverty, but progress has been uneven. Women are more likely to live in poverty than men due to unequal access to paid work, education and property.

These are all huge achievements in line with the targets set out by the first Millennium Development Goals. Unfortunately, extreme hunger and malnutrition remain a huge barrier to development in many countries. 795 million people are estimated to be chronically undernourished as of 2014, often as a direct consequence of environmental degradation, drought and loss of biodiversity. Over 90 million children under the age of five are dangerously underweight. And one person in every four still goes hungry in Africa.

The SDGs aim to end all forms of hunger and malnutrition by 2030, making sure all people – especially children – have access to sufficient and nutritious food all year round. This involves promoting sustainable agricultural practices: supporting small scale farmers and allowing equal access to land, technology and markets. It also requires international cooperation to ensure investment in infrastructure and technology to improve agricultural productivity. Together with the other goals set out here, we can end hunger by 2030.

Everyone can help to make sure that we meet the Global Goals. Use these eight targets to eradicate world hunger. 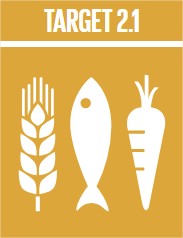 By 2030, end hunger and ensure access by all people, in particular the poor and people in vulnerable situations, including infants, to safe, nutritious and sufficient food all year round. 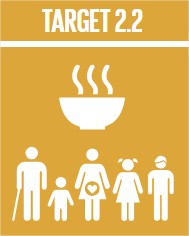 END ALL FORMS OF MALNUTRITION

By 2030, end all forms of malnutrition, including achieving, by 2025, the internationally agreed targets on stunting and wasting in children under 5 years of age, and address the nutritional needs of adolescent girls, pregnant and lactating women and older persons. 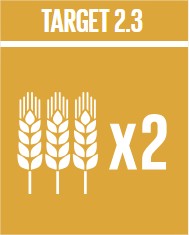 DOUBLE THE PRODUCTIVITY AND INCOMES OF SMALL-SCALE FOOD PRODUCERS

By 2030, double the agricultural productivity and incomes of small-scale food producers, in particular women, indigenous peoples, family farmers, pastoralists and fishers, including through secure and equal access to land, other productive resources and inputs, knowledge, financial services, markets and opportunities for value addition and non-farm employment. 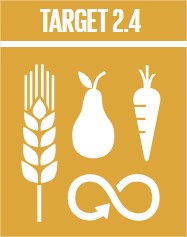 By 2030, ensure sustainable food production systems and implement resilient agricultural practices that increase productivity and production, that help maintain ecosystems, that strengthen capacity for adaptation to climate change, extreme weather, drought, flooding and other disasters and that progressively improve land and soil quality. 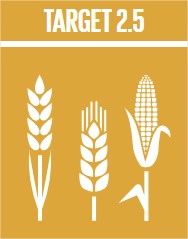 By 2020, maintain the genetic diversity of seeds, cultivated plants and farmed and domesticated animals and their related wild species, including through soundly managed and diversified seed and plant banks at the national, regional and international levels, and promote access to and fair and equitable sharing of benefits arising from the utilization of genetic resources and associated traditional knowledge, as internationally agreed. 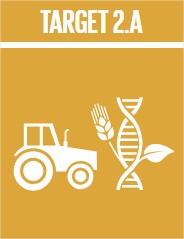 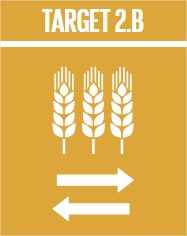 Correct and prevent trade restrictions and distortions in world agricultural markets, including through the parallel elimination of all forms of agricultural export subsidies and all export measures with equivalent effect, in accordance with the mandate of the Doha Development Round. 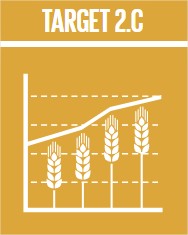 Adopt measures to ensure the proper functioning of food commodity markets and their derivatives and facilitate timely access to market information, including on food reserves, in order to help limit extreme food price volatility.