Eradicating poverty in all its forms remains one of the greatest challenges facing humanity. While the number of people living in extreme poverty dropped by more than half between 1990 and 2015 – from 1.9 billion to 836 million – too many are still struggling for the most basic human needs.

Globally, more than 800 million people are still living on less than US$1.25 a day, many lacking access to adequate food, clean drinking water and sanitation. Rapid economic growth in countries like China and India has lifted millions out of poverty, but progress has been uneven. Women are more likely to live in poverty than men due to unequal access to paid work, education and property.

Progress has also been limited in other regions, such as South Asia and sub-Saharan Africa, which account for 80 percent of those living in extreme poverty. New threats brought on by climate change, conflict and food insecurity, mean even more work is needed to bring people out of poverty.

The SDGs are a bold commitment to finish what we started, and end poverty in all forms and dimensions by 2030. This involves targeting the most vulnerable, increasing access to basic resources and services, and supporting communities affected by conflict and climate-related disasters.

Everyone can help to make sure that we meet the Global Goals. Use these seven targets to create action to end poverty in all its forms. 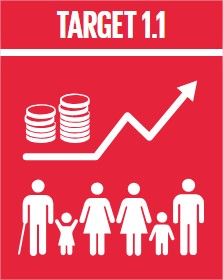 By 2030, eradicate extreme poverty for all people everywhere, currently measured as people living on less than $1.25 a day. 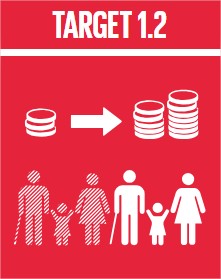 REDUCE POVERTY BY AT LEAST 50%

By 2030, reduce at least by half the proportion of men, women and children of all ages living in poverty in all its dimensions according to national definitions. 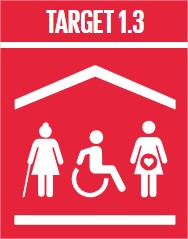 Implement nationally appropriate social protection systems and measures for all, including floors, and by 2030 achieve substantial coverage of the poor and the vulnerable. 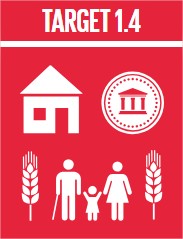 By 2030, ensure that all men and women, in particular the poor and the vulnerable, have equal rights to economic resources, as well as access to basic services, ownership and control over land and other forms of property, inheritance, natural resources, appropriate new technology and financial services, including microfinance. 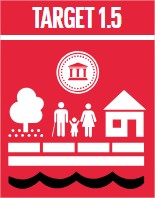 By 2030, build the resilience of the poor and those in vulnerable situations and reduce their exposure and vulnerability to climate-related extreme events and other economic, social and environmental shocks and disasters. 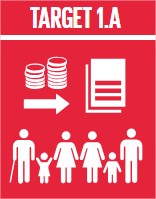 Ensure significant mobilization of resources from a variety of sources, including through enhanced development cooperation, in order to provide adequate and predictable means for developing countries, in particular least developed countries, to implement programmes and policies to end poverty in all its dimensions. 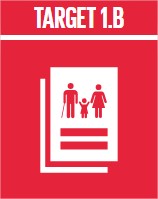 Create sound policy frameworks at the national, regional and international levels, based on pro-poor and gender-sensitive development strategies, to support accelerated investment in poverty eradication actions.